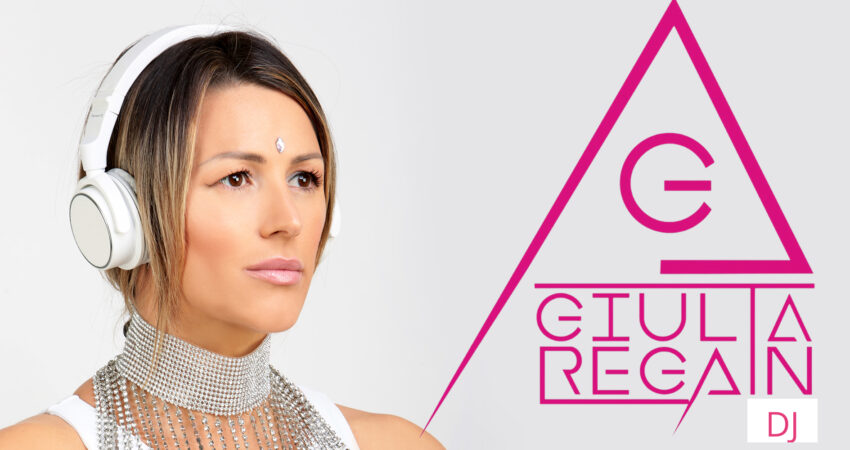 Giulia Regain is an eclectic and creative artist, a pioneer in the soul. She is one of the first female DJs in 2005 who play records starting from her land in the best discos on the Riviera Romagnola, the undisputed and avant-garde homeland of Nightlife in Italy.

Giulia loves to talk about music “without division but as a concept of union” in fact she transcends musical genres and is sensitive to the trendy sounds that lead to the evolution of music itself. From her origins to today a genre that she has always accompanied her is the “Progressive House” defining her djset as a “musical journey” full of overwhelming energy with that feminine touch and trance of melody, harmony and elegance in the sounds. Like a “priestess” she manages to go with the music in “mystical trance” using the energy and movement of the body in time with the music.

Explosive Dj on stage in festivals with its first performance in Mauritius in 2009 with over 30,000 people and a success given by an international and Italian sound. Her djset has a strong xenophilic imprint but her origins are never lacking because she is always an ambassador of “Made in Italy”.

2009 represents a decisive year, full of victories such as: “Top dj girl” for the Trend Awards in Italy, “best European female dj” Pink Armada “in Portugal and” Top Djette “in France.

In 2011 she became the Official Testimonial & Ambassador for Pioneer Italia.

In her life path made of Psychology and the Holistic world, after years of studies, meditations and search for awareness of the Self, she brings “Magic” into her career as a Dj-Producer to share it and transmit it with messages to a New Era.

In fact, in 2014 she created the #Gmagic World with 3 fundamental values “LOVE FAITH FREEDOM”. Aware more and more of the power of Music, as energy and emotions, Giulia Regain becomes the bearer of “Joy and Positive Energy” through Music with her #Gmagic Tour, musical productions, #Gmagic Podcast, video clips and songs in 432 hz (which can only be found on her Youtube channel) with the slogan “The Magic of Music”. Her djset create an even more magical atmosphere and an energy so intense as to make it “vibrate upwards” creating a real Experience!

Other awards arrive for Giulia to consecrate her long career in fact she is nominated among the 100 TOP Djane in the world and exactly in the ranking at # 53 in 2014 and # 55 in 2015 by djane.com.

Lover of Unicorns, Giulia Regain will be the executive producer (from the song to the video clip) of “UNICORN” which is attracting international attention by paving the way for productions with similar sounds such as “iLove”, “Pyramid”, “Eat Life # 1” and “Batwoman” also releasing with American labels.

In 2017 she is the Official Dj of the Arab Fashion Week in Dubai.

Since 2019 she is the Official Dj of Cento Carnival of Europe and music producer of the official soundtrack.

A real “Luxury & Fashion Dj” of high professionalism given by her great experience and innate elegance.

Batwoman feat. Dodo is a huge Electro House release from one of Italy’s Hottest DJ/Producers Giulia Regain featuring copious amounts of high volume energy, monstrous bass lines and heart-pounding beats. If you’re searching for the next dance floor banger guaranteed to get the club jumping, or if you’re looking for the next track be played on repeat on your favorite playlist. Then be sure to pick up a copy of Batwoman by Italian EDM phenomenon, Giulia Regain.

Eat the life #1 is a four track Progressive House Ep by Italian female DJ and producer Giulia Regain which features two remixes from Manna and The Dreamers. If you are looking for the perfect radio friendly DJ mix then pick up a copy of Eat the life #1 today.

Haunted Basslines Vol. 2, a various artist release from ShiftAxis Records. This album features some of the scariest basslines dance music has to offer. Be sure and grab your copy today for a creepy and spooky haunted Halloween!